Getting to know the Buntings on Raptor’s View

The subject of weeds can be quite a contentious one. Weeds mean different things to different people; gardeners and farmers for example, view weeds from very different perspectives.

A simple and good definition of a weed is – a plant of little value displacing, or with the potential for displacing, more valuable plants.

Raptor’s View has quite a lot of weeds ! Some weeds are just nuisances, irritations, short lived, growing in disturbed areas such as road verges, driveways and drainage lines, dying back after just one season and being replaced over time by natural species if soil remains undisturbed.

Plants with which we should concern ourselves are alien invasive species. These are plants introduced to South Africa from various parts of the world sometimes intentionally as ornamentals or for commercial purposes, or unintentionally, for example, introduced in fodder, with textiles or foodstuffs. Many have escaped into natural environments where they are able to spread, devaluing natural ecosystems and agricultural land.

As plants evolve over time in a landscape, they adapt to the environmental conditions. Insect borers, weevils, plant fungi and parasites evolve alongside them, keeping numbers in check and preventing the development of monocultures. Alien invasive species often do not have these natural enemies and can therefore outcompete indigenous species, displacing them and forming dense stands. Biological control agents have been identified and released for some species.

The best time to deal with aliens is early in their life cycles before they have had the opportunity to produce and disperse seeds. Some species are toxic to both man and animals, and others have the capacity to degrade soils or form impenetrable thickets, thus  preventing other land uses.

Photographs of some of the aliens identified to date on Raptor’s View are included below. 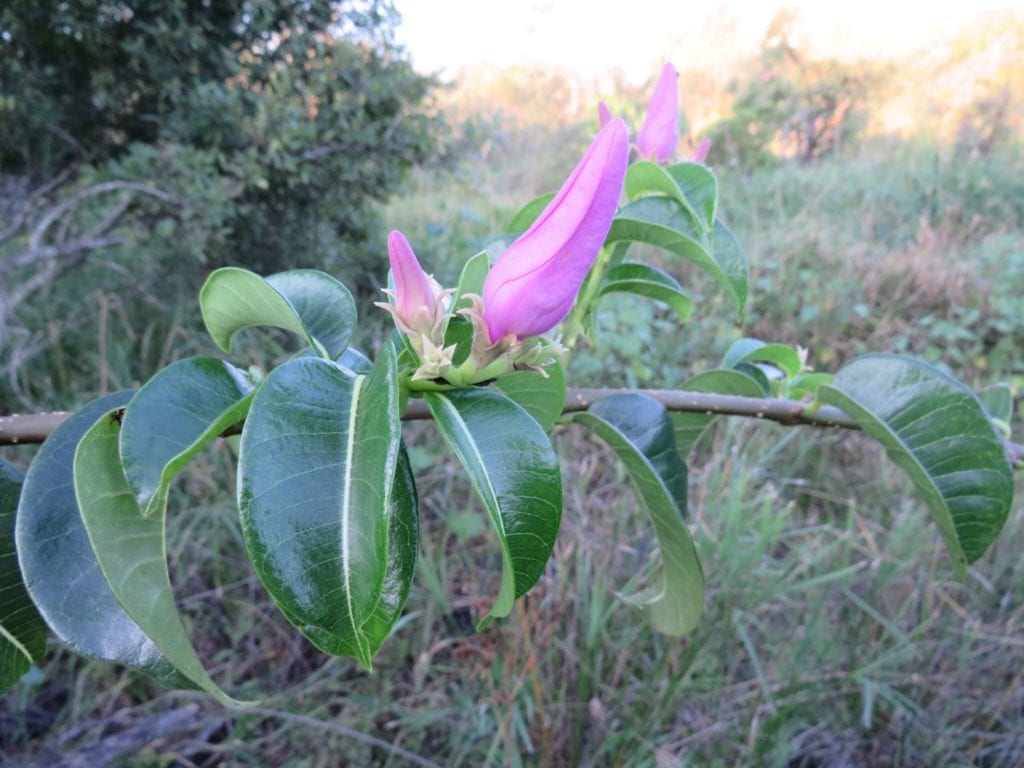 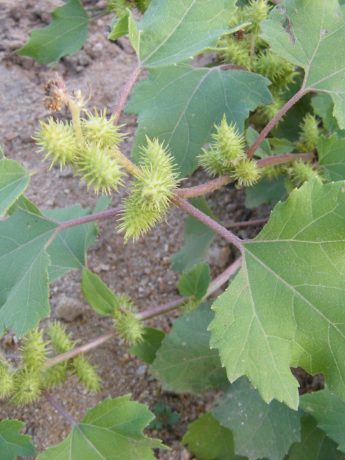 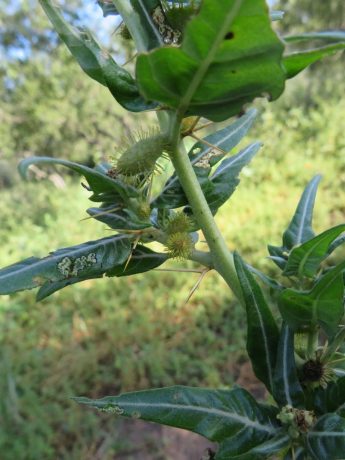 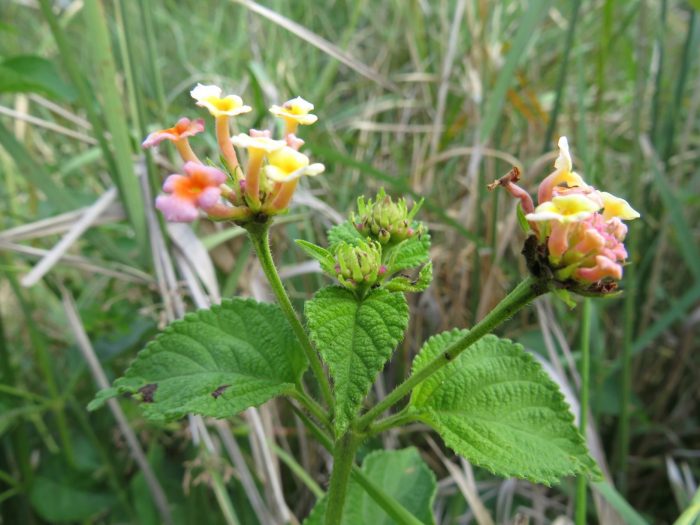 Buntings are sparrow-like granivorous birds of the genus Emberiza. They are recognised initially by their boldly-marked heads and often by a brightly coloured body. Occurring either singly or in pairs and occasionally in small flocks. The sexes are monomorphic meaning the male and female look the same with juveniles appearing slightly duller.
We have two buntings on the Raptor’s View bird list, the Golden-breasted Bunting and the Cinnamon-breasted Bunting. There is a third bunting which may possibly be found in the area on occasions and that is the Cape Bunting, however it is not currently on our bird list. 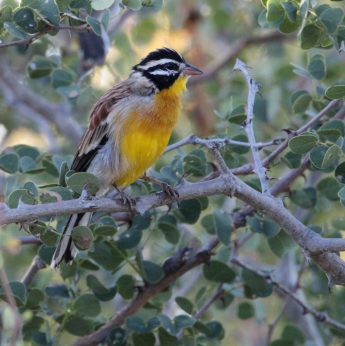 The Golden-breasted Bunting (GBB ) is a common resident on Raptor’s. An easy bird to recognise with a striking golden breast which seems to almost glow in sunlight. Although described as granivorous or a grain eater, the GBB will also eat insects. A monogamous breeder, the GBB forms a deep cup nest in trees or shrubs and is occasionally parasitized by the Jacobin Cuckoo. The Golden-breasted Bunting is not a threatened bird, but unfortunately because of its striking colouration, it is trapped for the illegal cage bird trade. Cinnamon-breasted Bunting (Klipstreepkoppie in Afrikaans)
Not as prevalent on our estate as its golden cousin, the Cinnamon-breasted Bunting (CBB ) is quite a common bird with both resident and migrant populations. Preferring rocky or boulder-strewn, grassland habitat, the CBB will also feed on insects as well as seeds. Similar to the GBB, the CBB is monogamous and builds its nesting cup on the ground.  The female CBB tends to be slightly paler than the male and of course, the juveniles are duller. The males have an obvious cinnamon or chestnut-coloured breast and the distinctive ‘striped’ head. It’s unlikely that the CBB could be mistaken for any other bird other than the much-lighter Cape Bunting. 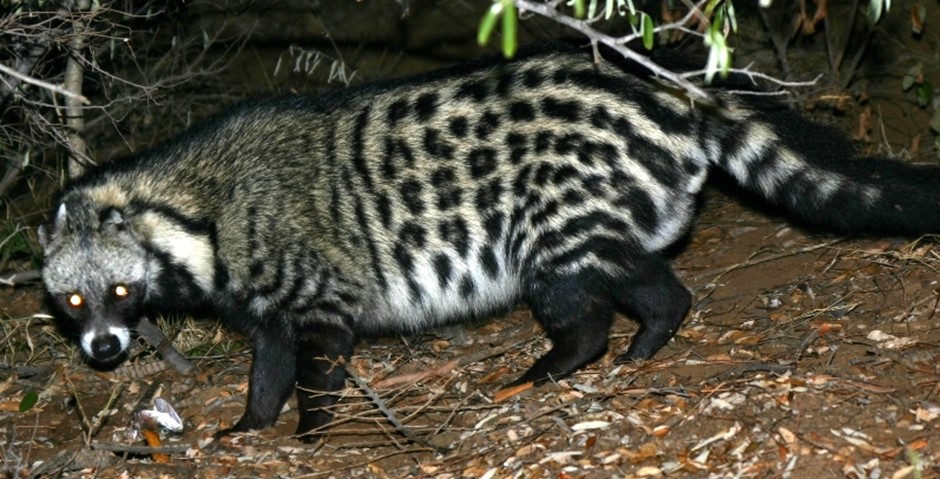 The African Civet is a common but elusive animal on Raptor’s View. It is secretive and mainly nocturnal, especially active around sunset, but can be seen on cloudy, overcast days where it is not disturbed. This animal is commonly seen around our homes and along the roads at night. It is usually solitary but can be seen together with others in the mating season (summer months). The coat is unique to each individual, just like a human fingerprint, and when it feels threatened or excited, it fluffs up its fur and erects the black hair of the crest along its spine, which makes it look bigger.

The Civet is not a cat despite its appearance—it belongs to a family of small carnivorous mammals known as Viverridae. It is closely related to the Mongoose family and hyena.

It relies on its cryptically camouflaged coat and hides during the day in thickets and eroded dongas. When moving it does so slowly, often staying motionless when disturbed.

DIET: although classified as a carnivore, the African Civet is omnivorous and an opportunistic forager.  Their diet may include cereals, fruits (especially of the Grewia spp. Raisin bushes) and they love eating the highly toxic millipedes. They are thought to play an important role in the dispersal of such fruiting trees.

A plant-based diet consisting of fruit explains why it likes to eat coffee berries and produces the famous “kopi luwak” from the partly digested coffee “beans” which comes from the ASIAN PALM CIVET not the AFRICAN CIVET. Civets make us of LATRINE SITES (known as Civetries) that also confirm their presence in an area. This civetries are often located at the junction of paths, alongside roads and in clearings. You will notice dried out rings from millipedes, seeds of Raisin bushes or other fruit, snake scales, insect body parts and small clumps of grass. 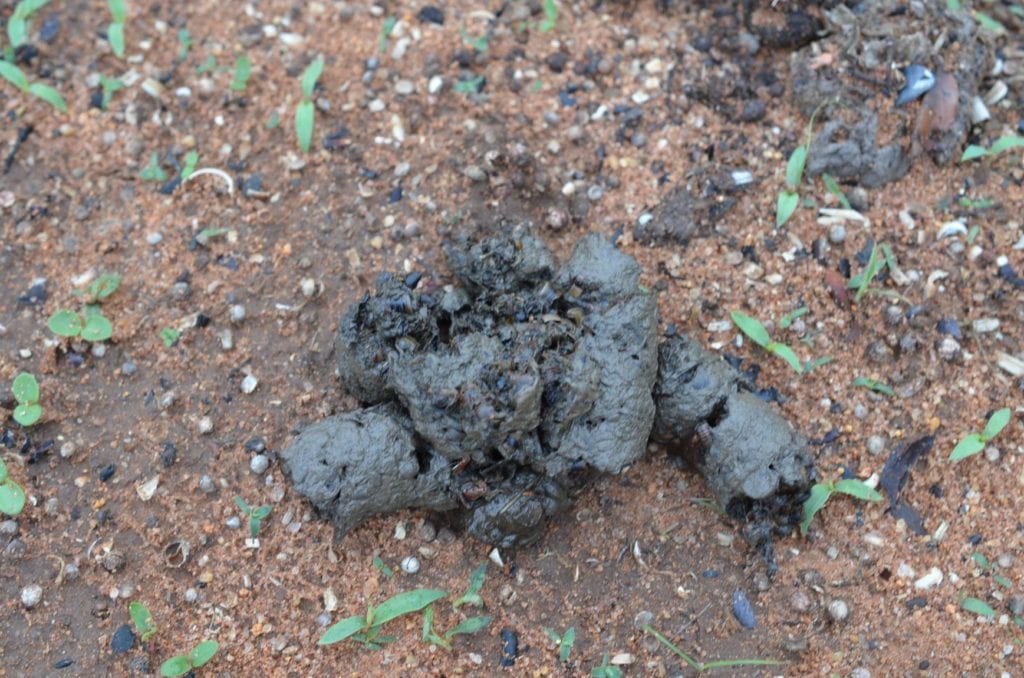 The animals dung is surprisingly large for the Civets body size! Other animals such as mongooses, genets, jackal also sometimes use these latrines. 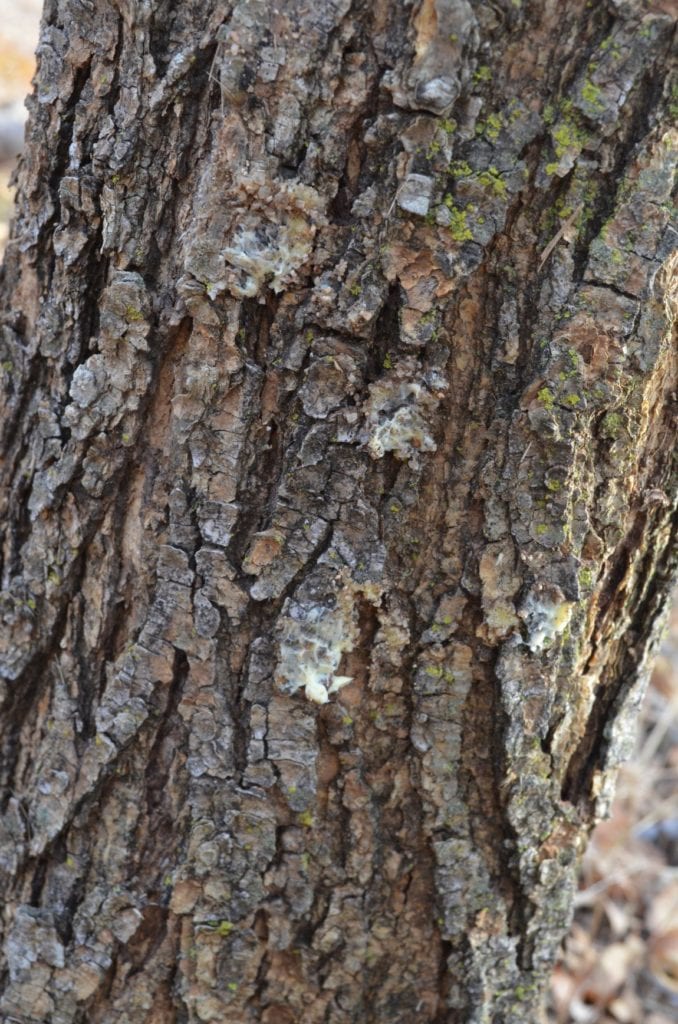 Scent marks or anal pastings are also an indicator of this animals presence. The glands release an oily and odoriferous secretion known as musk or civet. These are commonly found around civetries and are often around 30 cm high but Civets are known to do hand stands in order to wipe this paste onto trees and rocks.  This is thought to aid in broadcasting its scent and making it more noticeable, but some studies also suggest it may have something to do with bragging rights: the higher the pasting the bigger the animal leaving it! These pastings are often re-done after rains and for several days when an animal is active in an area.

This strong smelling secretion is also used when the Civet is threatened in an attempt to protect itself. Unfortunately, humans have found a use for civet musk. Though its smell is unpleasant when it is released from the perineal glands, it is attractive when the musk is diluted. This has led to its use in the perfume industry. Today civet musk is used primarily as a fixing agent for other scents in perfumes. The main chemical that gives the musk its odor and its pleasant scent when the secretion is highly diluted is civetone. 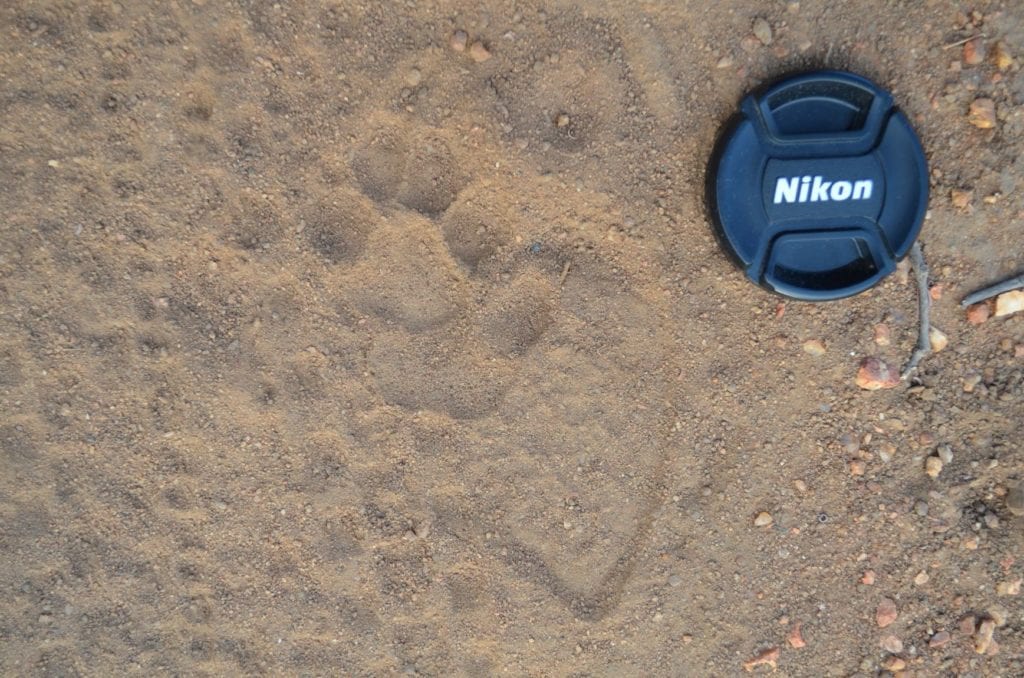 Front Spoor.  The feet each have five claws. These are non-retractable, like a dog’s claw. The front spoor (above) is almost perfectly circular 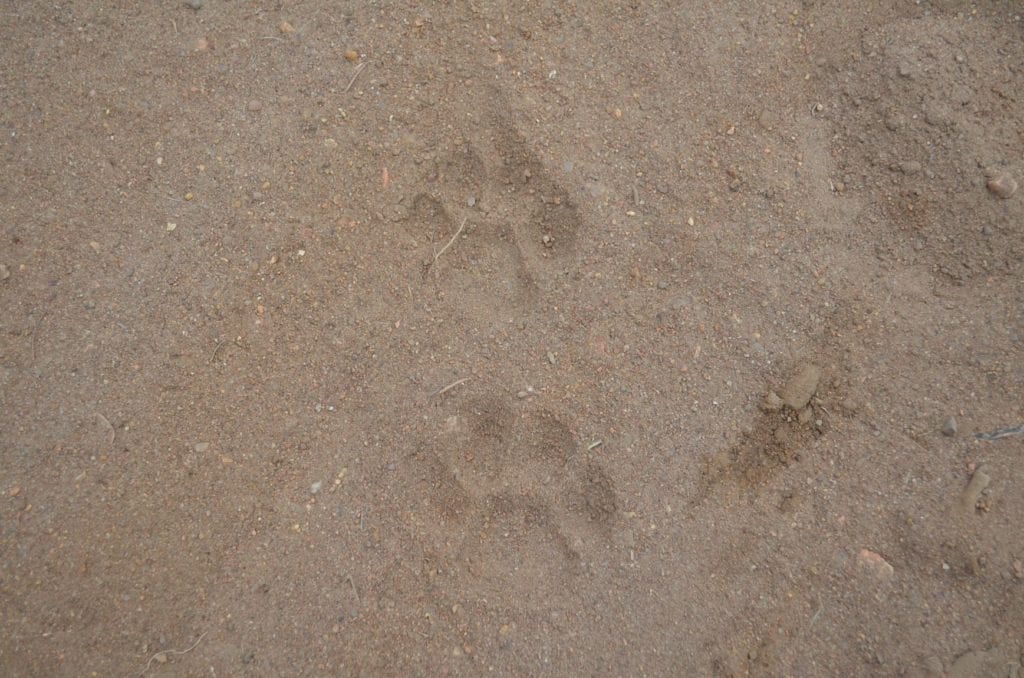 Front and Rear Spoor.
Rear (at the top of the image) is more oval in shape than the front spoor.  Between 5-6 cm

SOUNDS: The animal produces several types of vocalizations, including growls, screams, and a sound that is described as a cough-spit. It sometimes emits a sound that is said to resemble “ha ha ha,” apparently as a contact call. 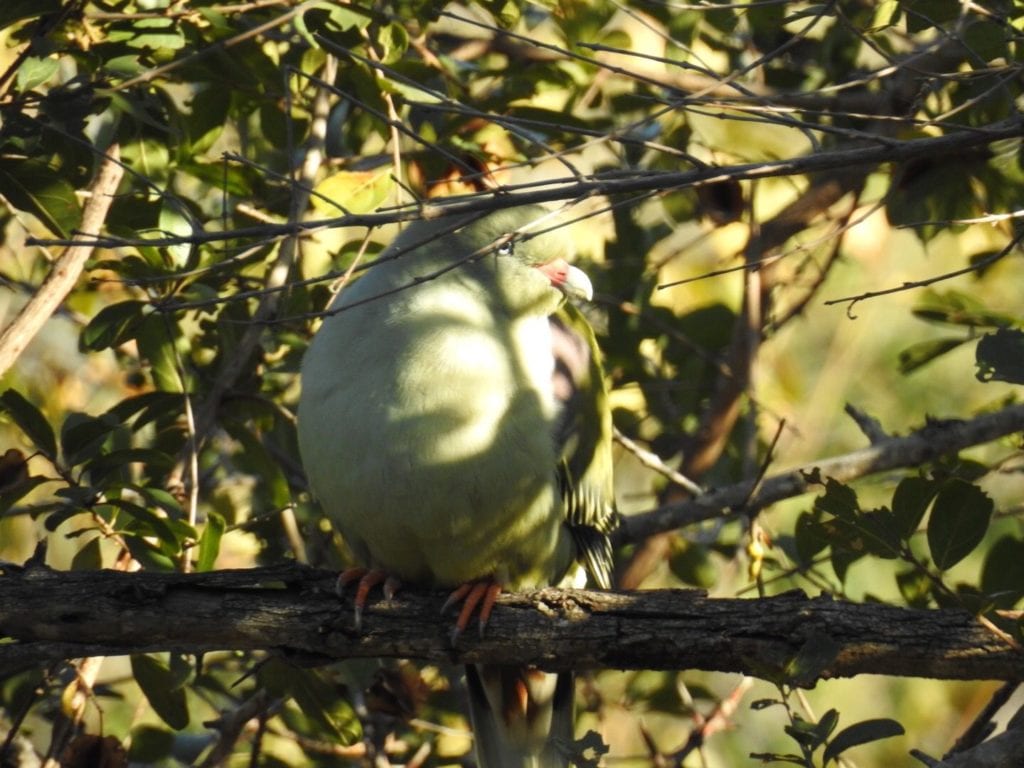 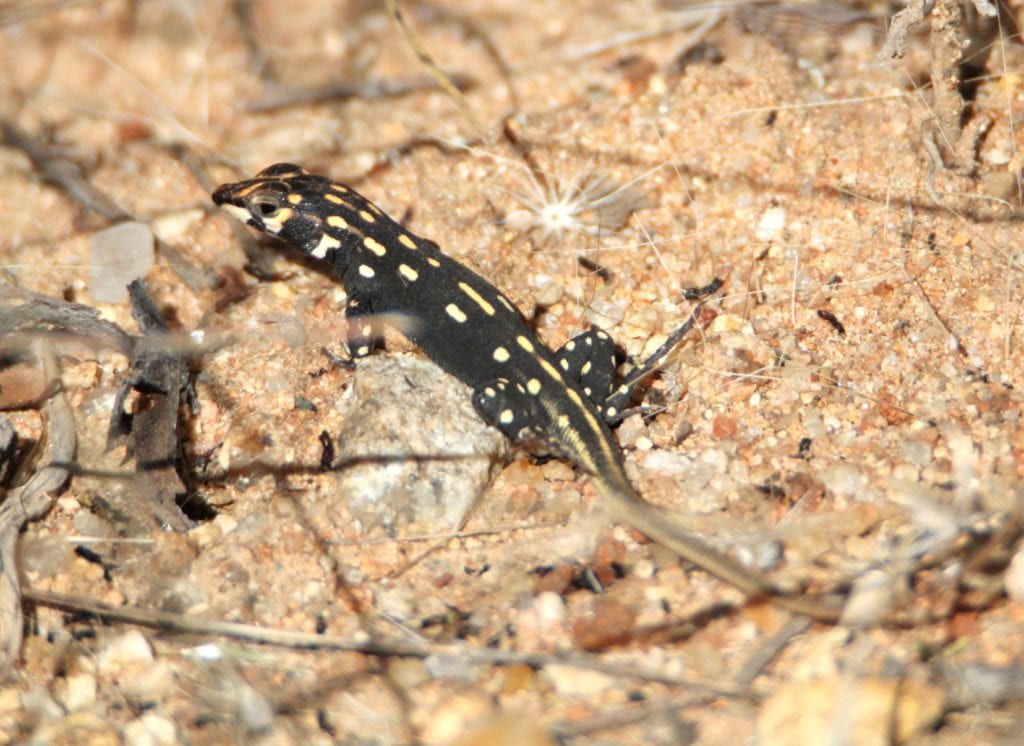 I believe that this is a juvenile Bushveld Lizard (Heliobolus lugubris). Very different from the adult, it moves with a hunched gait, mimicking the Anthia ground beetle to discourage predation as the beetles spray formic acid. This is one of the few recorded examples of a vertebrate mimicking an invertebrate. Source; Wikipedia.
Raptors View, 10/04/21. Steve Benbow 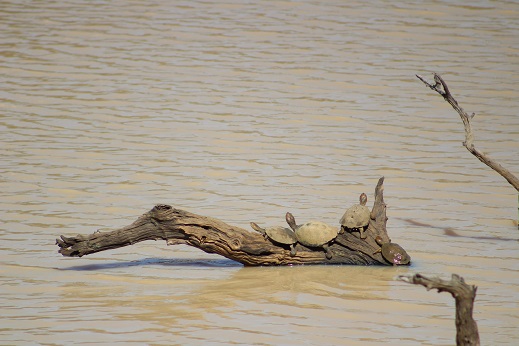 A common sight at Hamerkop Dam at this time of the year is the serrated hinged terrapin, Pelusios sinuatus.  Often seen in groups, sunning themselves on dead tree branches and on the muddy shorelines, it is one of the oldest living creatures on the planet and can be traced back 180 million years.

It earned its name from the hinge in its shell which it is able to close for protection.  It can be found both on land and in water, and although it tends to stick close to water, the female lays her eggs up to 500 m from the nearest water. Between 7 and 25 eggs are laid in October – January, with the hatchlings appearing during March – April.

It secretes a foul smelling substance from the musk glands on its skin when threatened. Source; Wikipedia.
Ali Joy 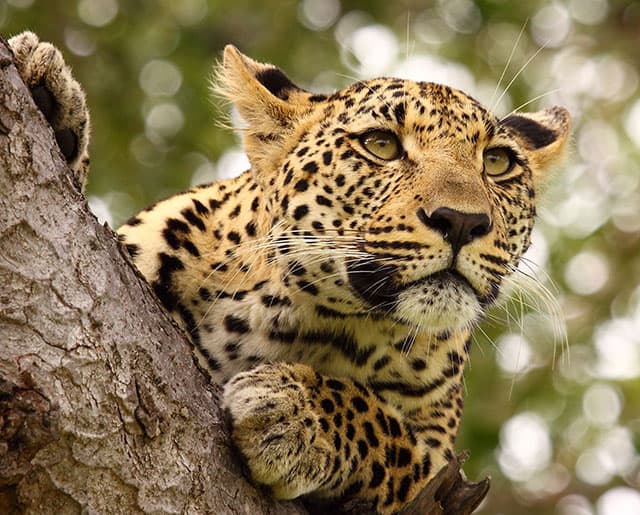 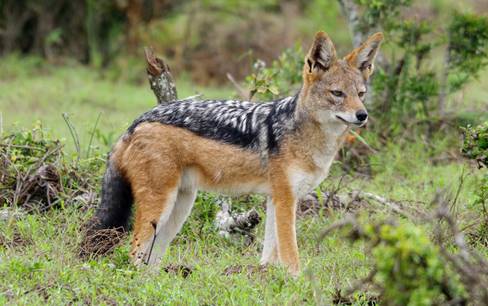